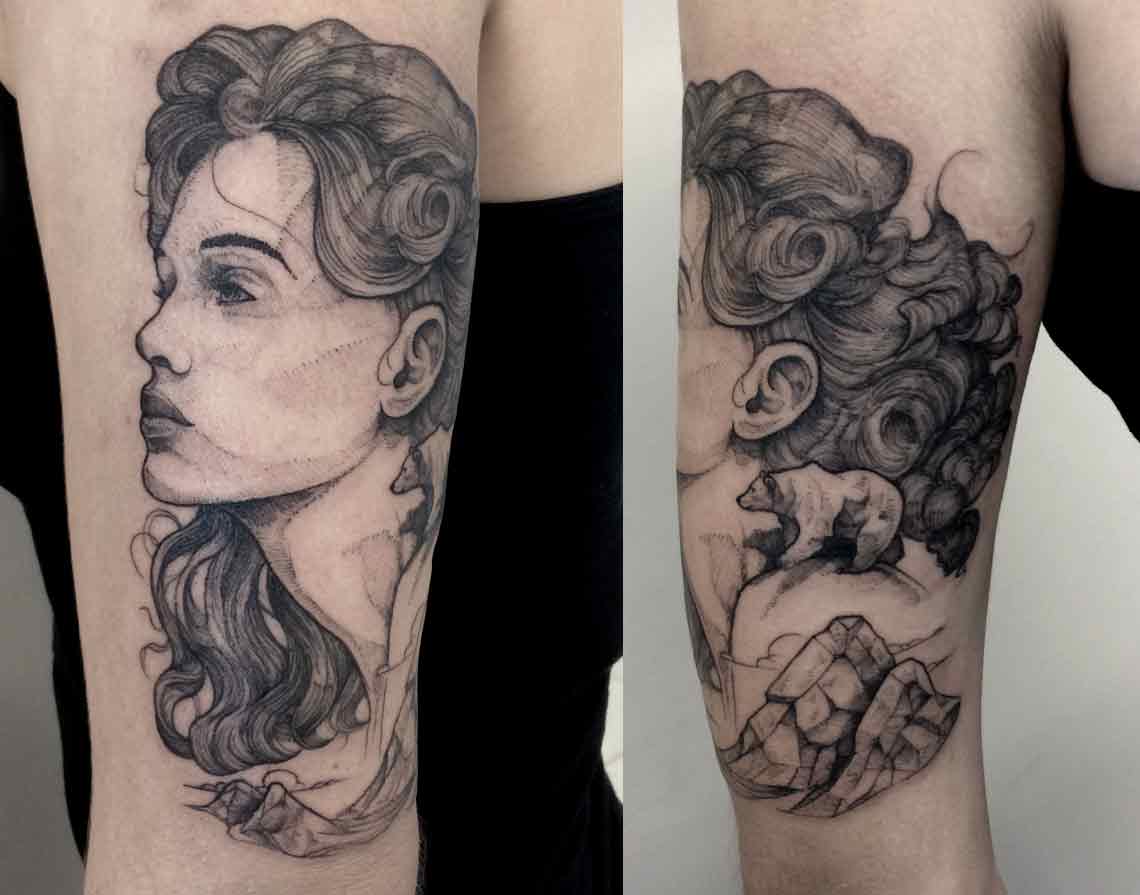 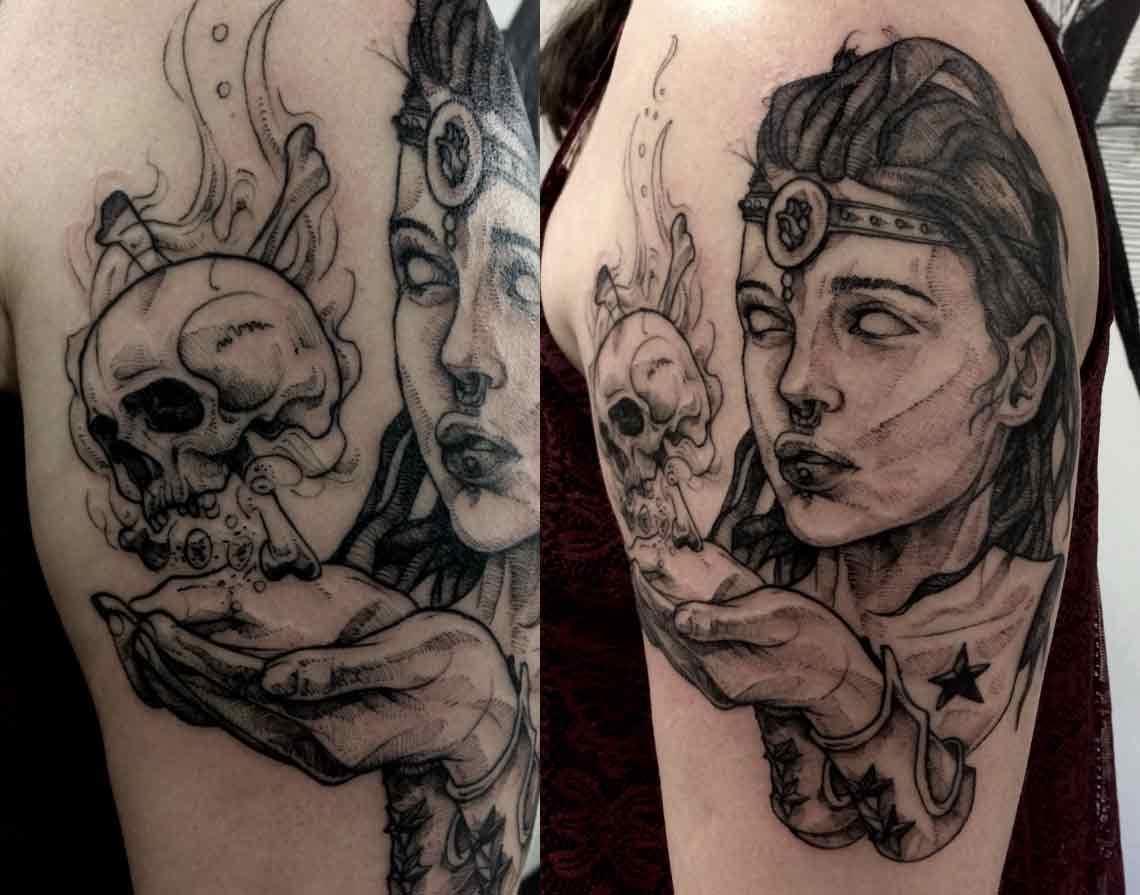 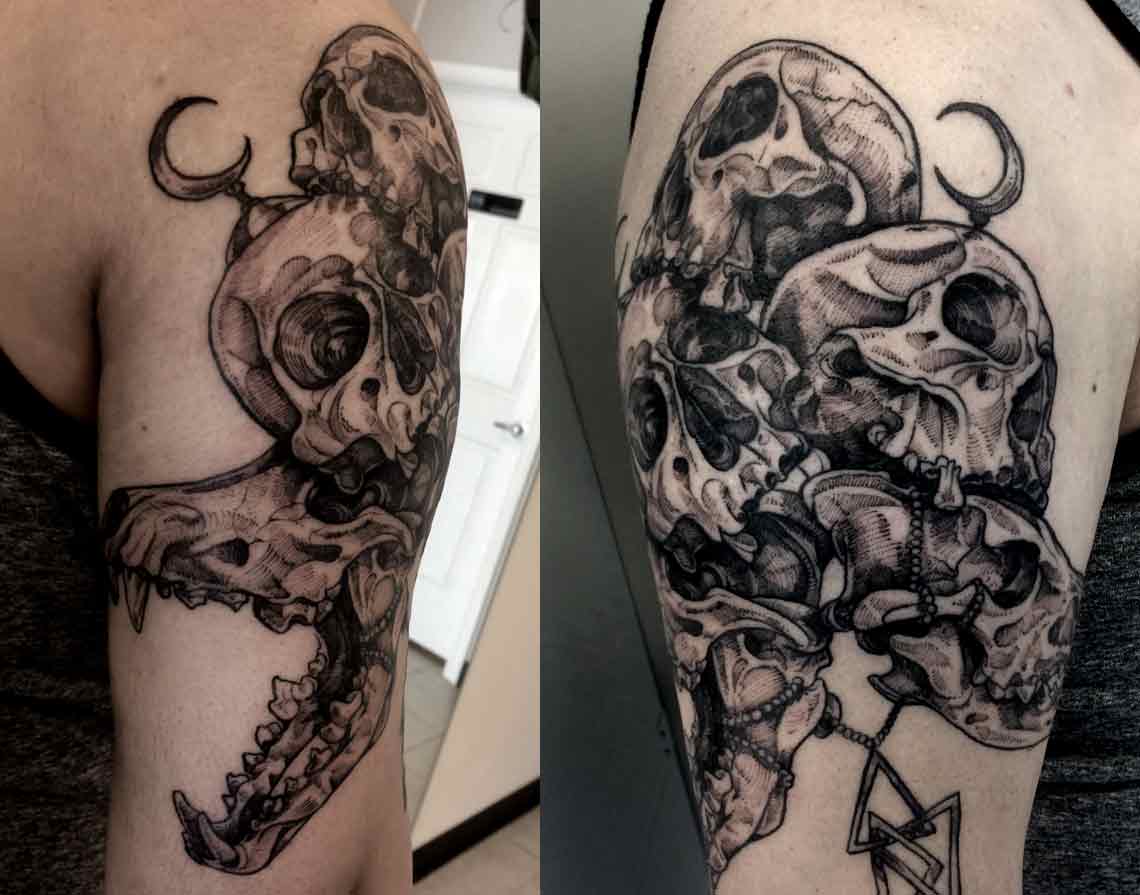 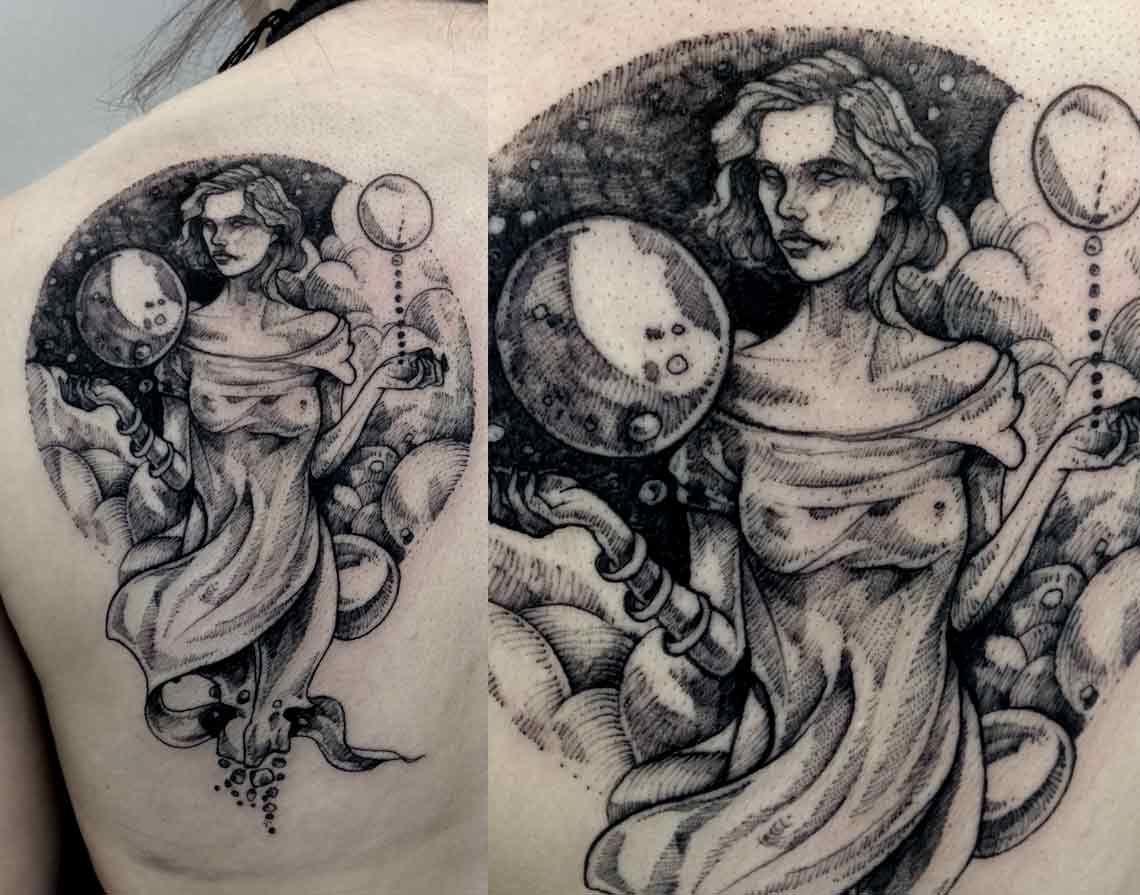 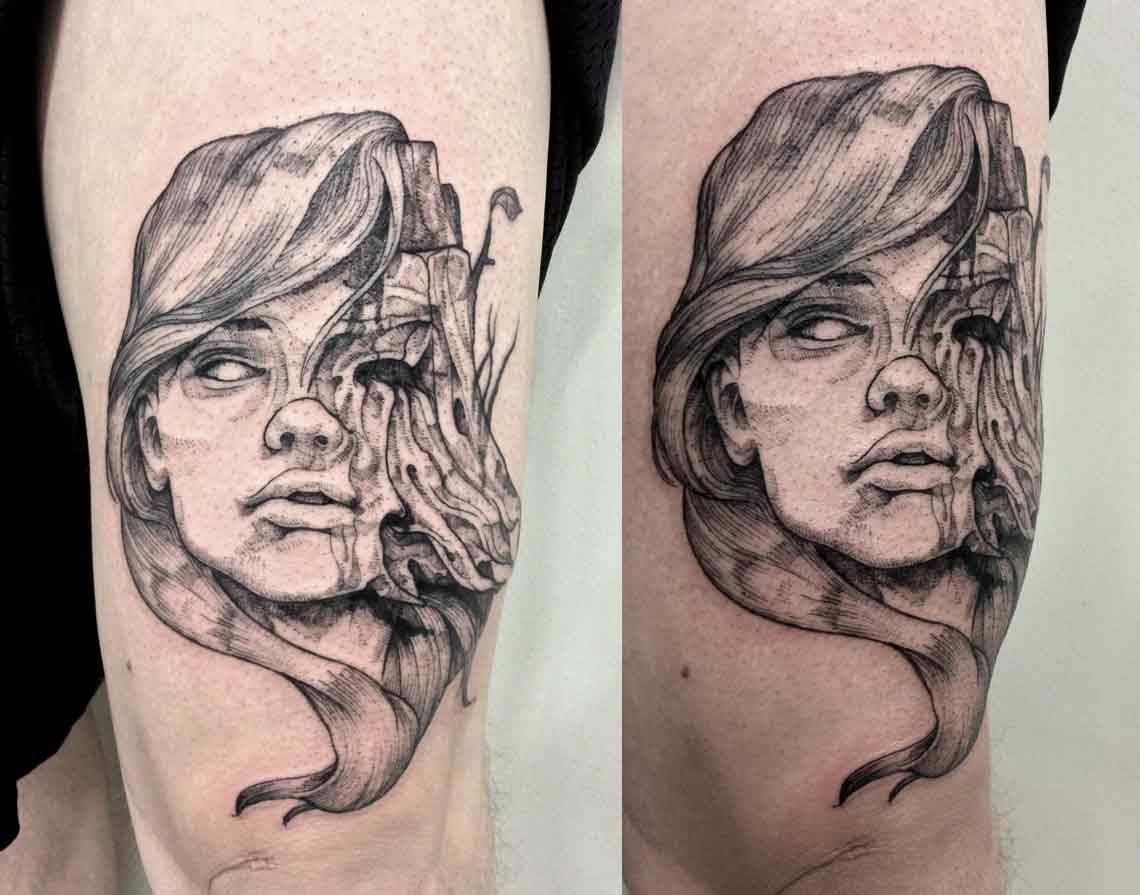 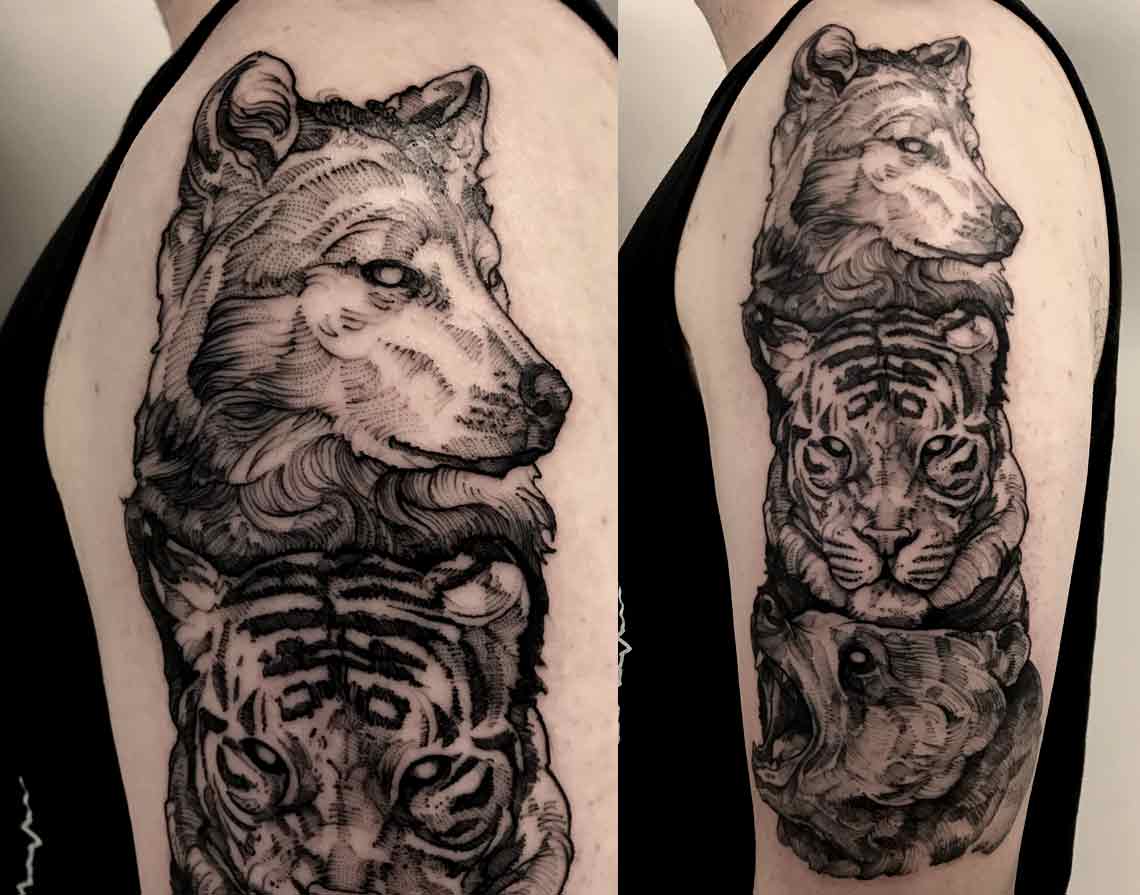 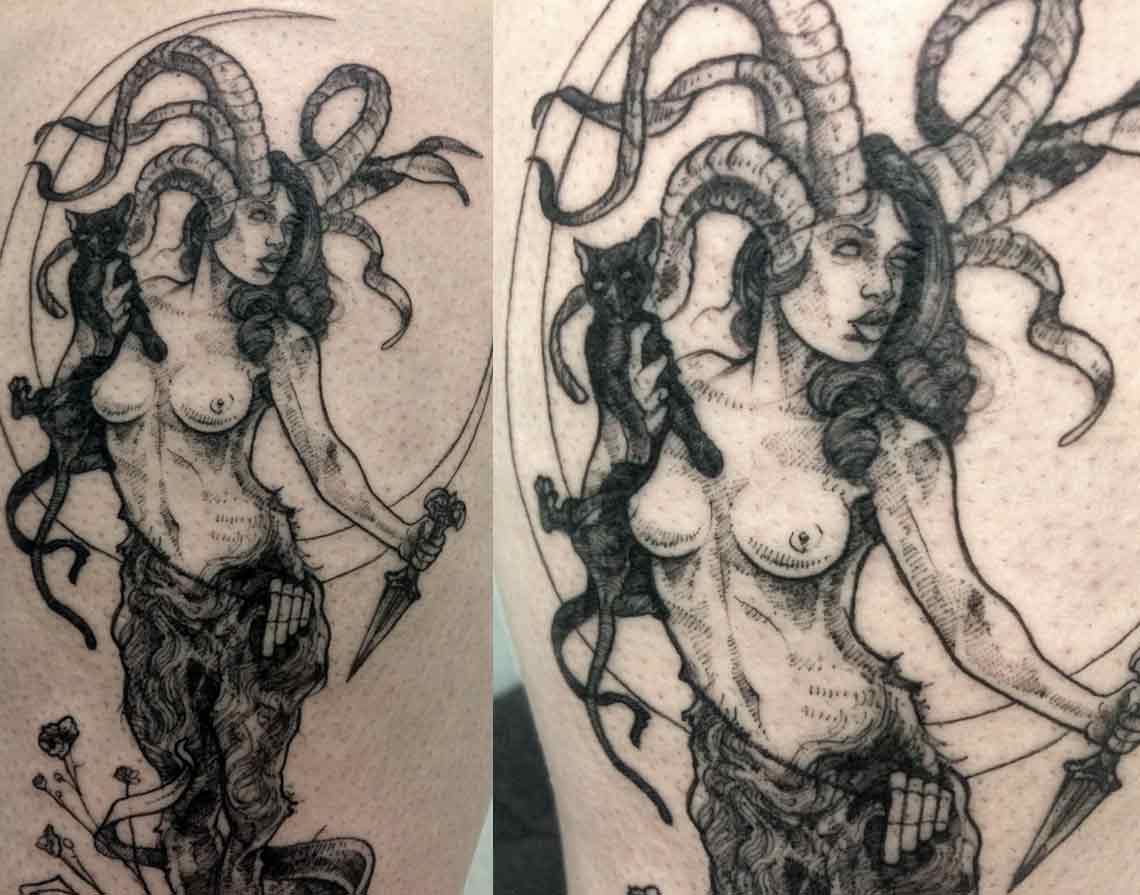 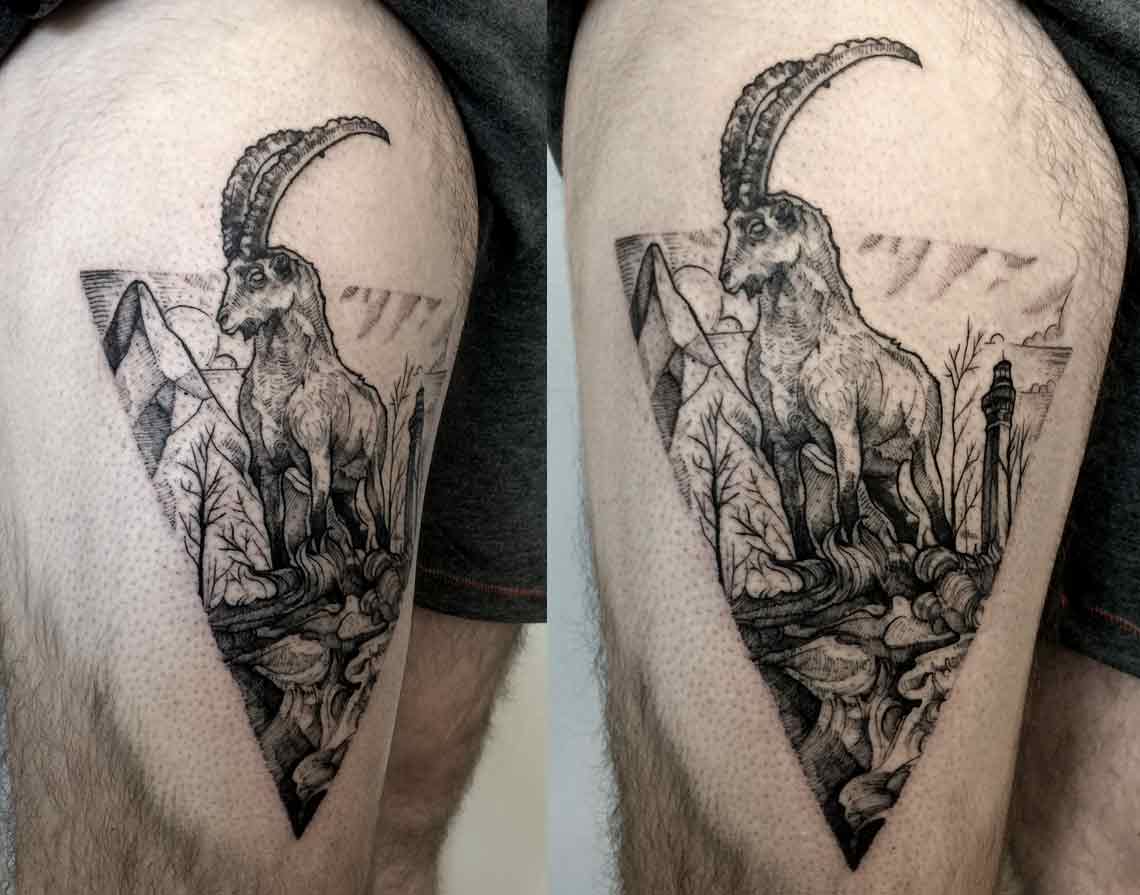 Get to know me!

David closes his eyes and sees black-sand beaches, grey oceans, grey skies, the sound of wind twisting through trees and rocks and deep-green grasses scattered with mossy bones. Strange stone houses rise from the grassy fields that lead up to the white-tipped mountains in the distance. Howling is often heard in dark and far-away places long after the bonfires have died.

When he opens them again, he is in an armless leather chair in a bright-white tattoo studio, his machine humming in his hand. He relaxes his shoulders and takes a deep breath before he begins His Work. He has been doing this since 2012.

David draws. With black ink and hundreds of lines he shapes the natural world: bones, snakes, plants, antlers, and horns. He loves all types of animals, most insects, and always loves drawing the human figure. His Work blends people and nature bringing out a unique magick. He has been a student of art since 2000.

It’s said that he once rolled a twenty-sided-die, a critical success, and now lives with his partner: Tina Poe and their maybe-a-cat/ maybe-a-monster child-pet Mojito Poe. He has worked at her Tattoo Studio in Austin, Texas, called Moon Tattoo since it opened in 2016. His house is filled with plants and bones and the firepit in the yard is always full of wood.

Where are you located?

I’m at Moon Tattoo, 1736 W Anderson Ln, Austin, TX 78757. This is the North central area of Austin. Look for our big mural while driving West on Anderson! Take a look at the map in the Contact section to help with directions.

Do I need an appointment?

You can stop by anytime during business hours to check out the studio and look at my portfolio. However, I meet with clients by appointment only, and will not have time to talk otherwise.

Do I need to pay a deposit?

The deposit will be also void for cancellations at any time, no-shows, or later arrivals after 30 minutes. If you no-show for a scheduled consultation you will be not be able to schedule with me in the future.

How much will it cost? How do I pay you?

I charge an hourly rate with a set minimum, or will provide a flat rate for specific designs that I’ve done. The best way to get an idea of the cost of the tattoo you are thinking of is to talk to me about the potential size, placement, and complexity during a scheduled consultation. I’ll use this information to give you an idea of how long the tattoo could take and an estimate of how much it may cost. An average session can last about three hours, and some tattoos will require multiple sessions depending on size, complexity of the design, or placement. The more calm and still you are during your tattoo session, the faster it will go.

I take all major cards through Square, and also accept cash. I don’t accept checks.

When can I see the drawing for my tattoo?

On the day of your tattoo appointment we will review the drawing together, in person, and make any minor changes needed before starting the tattoo. I do not provide you the design prior.

How do I prepare for my tattoo, and care for it after?

What kind of tattoos will you do?

I only tattoo in black, in my style, with my original artwork. I am currently looking to do more of these types of tattoos:

What I will not be tattooing:

Anything else I should know?

Read over Moon Tattoo's FAQ and Tips section for a lot more information.

Stop by to see me, or drop me a line.